Saved Searches Advanced Search
Due to a planned power cut at the Library, the catalog will be available for browsing only from 6pm Sun 2/16 until 9am Mon 2/17.  Account access and downloading of materials will be unavailable. 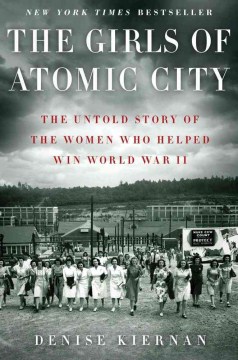 The Girls of Atomic City : the Untold Story of the Women Who Helped Win World War II

Good story but the authors attemp to be"clever" or "cute" greatly distracted. Would have been a much better read if better written. She has so much material - too bad she couldn't have used a better tecnique too write

In late 1942, the United States government created an entire secret city in the hills of Tennessee. Oak Ridge was not on any maps. 75,000 people lived there, including thousands of young women from across the eastern United States. It was the largest secret mission in history. It was, of course, the factory where uranium ore was purified to increase the content of a particular unstable isotope: U235. Thousands of tons were condensed down to a few pounds – just enough to help create the atomic weapons which were dropped on Japan in August, 1945, ending World War II.

This book focuses on the lives of ordinary workers, especially the young women, during the 1940’s and the extraordinary secrecy in which they worked. Along with this story, Kiernan weaves in the basic history of the Manhattan Project and the development of the ideas in physics which led to the splitting of the atom and the discovery of atomic energy – and the important contributions of two women physicists (Ida Noddack and Lise Meitner) who were left out of the Nobel Prizes and many of the history books.

Very interesting, although not well organized.

Let me just start by saying that Non-Fiction is not my normal preferred genre. I find most Non-Fiction dry and hard to get through due to authors who throw their opinions in where it should be facts. This book is not anything like that. The author is very adept at making the facts clear in a way that is easy to understand and interesting to read. If you're curious about the unknown history of the Manhattan Project, this book is for you.

This book tells about an important, yet secretive, chapter of US History and how women played such a big role. This book also talks about segregation at the highest level of government work. The best thing about this book is that it brings each woman's story to life first hand, rather than an interpretation of the facts. This is one of the best non-fiction books I have ever read!

Enlightening on US history & women's studies. We'll never see this kind of gumption again - at least not in my lifetime. It sure hits home how African Americans were treated, even as they worked for the same goal, plus all those who fought & died for this country.

So much history that was kept silent for so many years appears in this book in a style that makes the chemistry understandable for readers. The human side of the story is remarkable and points out again how good the Greatest Generation really was during this remarkable time of the people doing their best to shorter WWII.

I have been in a bit of a women's history mood. I read Hidden Figures by Margot Lee Shetterly and then I went on to Rise of the Rocket Girls by Nathalia Holt. Both were wonderful books that outlined how some really intelligent women were responsible sending men into space. I looked forward to this book hoping for more contributions to women's history. This story was different from those other books, but still very interesting. These women were working away from homes on secret projects. They all had one specific job, but they couldn't tell anyone what they did for fear that the whole picture would be revealed. In this remote location in Tennessee, a whole town was built by the United States government to do work to end the war. The secrecy was stringently enforced, but at the same time these people were living lives, dating, and even marrying in this secret city. Who would have thought that that many people could keep that big of a secret. Interesting.

After introducing the code name for uranium—tubealloy—in the opening pages, Denise Kiernan refers to it by that code name throughout the text, until after the Secret is out. The narrative actually begins with the revelation of the Secret, but then circles back to show how the eight main women Kiernan follows arrived at the Clinton Engineer Works (CEW). The chapters alternate between the women’s lives and work in Oak Ridge, and chapters about the science and history of the Manhattan Project—things the women in Tennessee knew nothing about at the time. This is part of Kiernan’s strategy of compartmentalization, designed to mimic in literary form the secrecy that the CEW employees operated under during the war. The view from within CEW is narrow and circumscribed, each woman confined to her own role. Talking about your work was forbidden, and anyone might be a spy. The Tubealloy chapters treat history and science more broadly, although the two begin to bleed together as the Secret comes closer to being revealed. Many other books have been written about the Manhattan Project, and these chapters largely retread familiar ground if this is not your first read on the subject. Full review: https://shayshortt.com/2016/06/30/the-girls-of-the-atomic-city/

Thousands of women eventually worked at the facility now known as Oak Ridge in Tennessee, many like the recent high school and college graduates Kiernan profiles. What they knew was they were helping to shorten the war, what they didn't know was they were enriching uranium to build the atomic bomb. Kiernan deftly weaves the story of these young women with the larger story of the talent, intrigue and politics that ushered in the atomic age. Pretty fascinating. For another book I loved that's set in this place and time read Marianne Wiggins 'Evidence of Things Unseen.'

Excellent hidden history of the patriotic and devoted young women who worked unbelievably hard and lived in appalling situations without question in order to help bring the war to a quick end. Albeit controversial, these women were heroes in their own right to the scientists, the military and politicians including Presidents Roosevelt and Truman. An excellent book group discussion book.

My book club chose this book, and few members finished it. The subject matter was fascinating, but the book itself was hard to get into. It jumps around between many people and points in time, and the author tries too hard to make an interesting story into something even more suspenseful and exciting, using long, flowery descriptions for mundane things.

Fascinating look at Oak Ridge and the people who lived there. I enjoyed how chapters about the lives of the women were interspersed with technical chapters about the making and secrecy of the bomb. The book was a little longer than I felt it needed to be, but overall a good read.

Though The Girls of Atomic City does some work to situate this history, mostly Denise Kiernen focuses tightly on Oak Ridge and the women working there. It uses a story telling format relying on extensive interviews with women who worked there, with a few brief interludes for more straightforward factual history. I found the writing a bit overly clever at times, often using cryptic phrases, acronyms, and styles that mimicked the secrecy of the situation but also made me a bit confused and lost.

Historical narrative about the day to day workings to accomplish the build of the devastating atomic bomb USA dropped on Japan. Details, secrets within the framework of a normal working life in a seemingly factory town that's not what it appears to be. Deep secrets underlie the truth. Come to understand the complex scientific underpinning of the cold war and conservative fifties. Reads like a romantic novel; a powerful story about the science behind the bomb and the every day people working on it.

Fascinating story-and it is true! I learned a lot about a long secret part of U.S. History.

This book is for anyone who enjoys an historical and true story. Denise Kiernan offers an insightful look into the daily lives of the women who lived and worked in what was a secret city--Oak Ridge, Tennessee--established as part of the Manhattan Project in World War II. The narrative explicitly illustrates the compartmentalization and secrecy that the U. S. undertook to assure the development of the atomic bomb with the goal of ending the war. Reading the story gave me a deep appreciation for the spirit and sacrifice of the times. The author provided such detail it felt as though I was there with the women during their time in Oak Ridge. A well done true story!

Having had an uncle who was present as a graduate student "under the stands" at Stagg Field for the first atomic reaction, an aunt who worked as a scientist at Oak Ridge National Laboratory and a friend who was with her family at Oak Ridge during World War II, I was fascinated to put this period of history together in a coherent way. Recommend this book highly for anyone interested in the social history of WW II.

An interesting look behind the scenes at the top secret city behind the war effort to enrich uranium for the Manhattan Project. It's fortunate that the author was able to interview people who were there, as many of them are now in their 90s and won't be with us to share their memories much longer.