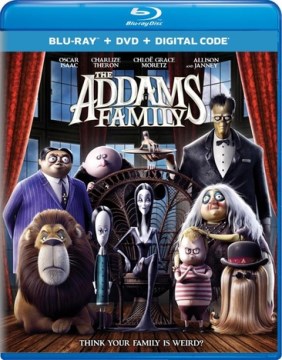 Did not think much of this. They could have at least made the characters look the same as the TV actors in cartoon form. I gave up on this movie shortly after they moved into their mansion.

It was "okay". My daughter enjoyed it, but it fell flat for me. I did like the animation during the credits, though. :/

A cute but totally unnecessary remake. I have to say Lurch makes the movie.

Enjoyed it, BUT! - Believe it or not, the 'Wednesday' of the T.V. series was closer to what Charles (Chas) Addams created. The character who came to be know as Lurch, although evolving into The Boris Karloff Frankenstein Monster clone, actually started out as another Karloff role: Morgan the Butler from "THE OLD DARK HOUSE". And Wednesday is actually Margaret O'Brian`s role in "MEET ME IN ST. LOUIS", Trudy. Watch the second film and see. SHE`S A RIOT!

I accidently requested this, did not watch it...

Quite a funny movie with some heart touching family scenes

A fun, laugh out loud movie for everyone about the importance of family and the value of being an individual.

As I grew up watching The Addams Family in the '60s, I was was really looking forward to this animated version. I was so disappointed. It was absolutely awful!!! I thought it may have just been a generational thing, but my 11-year old granddaughter and her best friend watched it with me, and they both thought it was lame, too. It isn't often I recommend a pass on a new animated film, but if you are a fan of any other version of The Addams Family, you be best to skip this one. However, if you've never seen any of the other Addams Family films or the sitcom, you may find some value in it.

I didn't realize it was an animation but decided to watch it anyway. I didn't like it at all. I don't know what I was expecting but it wasn't what I got. This whole modernized monsters theme just didn't cut it for me. It just made me miss the original all the more. And ok, I'm not a kid anymore so sure, maybe that was it but I also think I would have felt the same way if I were still a kid. It just had something this new version lacks. However, if I were a kid seeing this for the first time - I don't know. I might like it then.

I love the Addams Family (TV & film) so had high expectations for this animated version but was extremely disappointed! Basically a rehash of Hotel Transylvania with a twist of Despicable Me, which were both funnier than this waste of 90 minutes.

Super fun remake of a creepy family every family can relate to. If you're a fan of the live-action, give this one a try. You won't be disappointed!

It's not the perfection of the Christina Ricci version, but it will certainly do. Pleasantly surprised by it, and if you love the Addams Family as much as I do, you'll like this. It's probably more mature than most kids will enjoy, but tweens and above will appreciate it.

Another animated movie that is surprisingly good.
.
I had no expectations... it turned out to be a great slice of nostalgia (to me), plus entertaining enough that the whole family was happy.