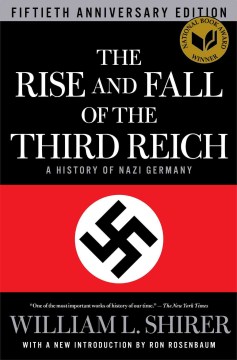 The Rise and Fall of the Third Reich

A History of Nazi Germany

Baker & Taylor
Chronicles the Nazi's rise to power, conquest of Europe, and dramatic defeat at the hands of the Allies.

Simon and Schuster
The fiftieth anniversary edition of the National Book Award–winning bestseller that is the definitive study of Adolf Hitler, the rise of Nazi Germany, the Holocaust, and World War II. This special edition now features a new introduction by Ron Rosenbaum, author of Explaining Hitler and How the End Begins.

No other powerful empire ever bequeathed such mountains of evidence about its birth and destruction as the Third Reich. When the bitter war was over, and before the Nazis could destroy their files, the Allied demand for unconditional surrender produced an almost hour-by-hour record of the nightmare empire built by Adolph Hitler. This record included the testimony of Nazi leaders and of concentration camp inmates, the diaries of officials, transcripts of secret conferences, army orders, private letters—all the vast paperwork behind Hitler's drive to conquer the world.

The famed foreign correspondent and historian William L. Shirer, who had watched and reported on the Nazis since 1925, spent five and a half years sifting through this massive documentation. The result is a monumental study that has been widely acclaimed as the definitive record of one of the most frightening chapters in the history of mankind.

Here is the complete story of Hitler's empire, one of the most important stories ever told, written by one of the men best equipped to write it.

This worldwide bestseller has been acclaimed as the definitive book on Nazi Germany; it is a classic work.

This one took some time and effort, but was well worth the effort. This one is a must read, more now than ever as the identity politics of the left continue to grow.

I have to caution those who think that by checking out this book, they will be checking out the unabridged version of 1,000+ pages. This isn't that book. In fact, I was quite surprised to see it. My memory of the book was of the red covered version that I must have stored away in a box somewhere. You can see that version on Amazon here:

Instead, this was one of those hardcover, oversized books and on the front cover, there's a huge swastika with the words "Illustrated and abridged" underneath it. If you want to see a thumbnail of the cover, you’ll find it at this link here:

When I first saw it, I was standing at the library checkout counter, and was immediately shocked and disappointed all at once, mainly because it didn't look like the book I remembered and clearly was an abridged version. Later, I read the Wikipedia page for this book. Citing "Another Life : A Memoir of Other People," by Michael Korda (available as an e-book through the Tacoma Public Library), it informs the reader that "bookstores across the country protested displaying the swastika and threatened not to stock the book" when it was first published back in 1960. Standing there at the checkout counter, that big book with the enormous swastika on the cover, in front of people who may or may not be familiar with the book and did not know me or why I had wanted to check it out, I could understand why. But I thought, what the heck, I checked it out, I might as well take a look at it. And so I did.

Before I begin, I should probably let it be known that I, like many, are inherently prejudiced toward the abridged version of something. I don’t know why exactly. I suppose it feels as if I’m getting the cheap knockoff of something and not the real deal, like eating a slice of Wonder Bread instead of sinking one’s teeth into a hearty, chewy hunk of country loaf. (This comparison is a bit ironic considering that due to a shortage of steel during WWII, Wonder Bread shipped to shelves unsliced. Even so, an unsliced loaf of Wonder Bread is hardly a fulfilling, flavorful rustic country loaf and in that respect, I would imagine this comparison is valid.)

Be that as it may, not many have time to read a book of more than a thousand pages. If so, this book is for you. Be warned, though: Just because this is the abridged version does not mean that this is an “easy read,” but in many ways, it is. In fact, it isn’t too unlike one of those picture books you might see lying on a coffee table in someone’s living room. However, this would be a coffee table book like no other.

In other ways, it is not such an easy read. I don’t know how many other “abridged” versions of this tome exist, but this one was awkwardly worded in several places. Misspellings/typos can impede understanding as well and this version had some of those, too, but they paled in comparison to some of the sentences which often could have been helped with an addition of a comma from time to time. Others were just simply awkward. Let me give you an example:

[After proclaiming that Czechoslovakia had “ceased to exist.”]:
“The Fuehrer’s revenge was complete, and that it was sweet he showed in the series of proclamations which he issued.” (p. 107)

Perhaps complaints over sentence constructions may seem picayune, as may my gripe that the book did not have more maps. The book actually has quite a few of them, but they all seem to be of the same large regional one sprinkled throughout (albeit with different focuses). None were the small, inset type that help the uninitiated to understand the finer details of a battle or situation.

Comments are capped here at 4,000 characters, so I’ve had to chop this one off. You can link to my more complete review by clicking on the link below:

For a link to all 1,753 Amazon reviews of this book, click here instead:

Popular wisdom holds that someone invoking Hitler, or the Nazis* (in an argument not directly about Hitler or Nazis) automatically loses the argument -- the comparisons are that tired, cliched, and emotionally blackmailing. But if you know your facts about this era of history, you may well win that argument. There are so many obvious parallels to today's events, or to any future conflict involving humans. Shirer did not have the benefit of modern hindsight, or access to all present-day sources. However, he not only lived at that time and swooped in in later years as a war correspondent, as many writers did; he also was a reporter in Germany since 1933, and knew many average Germans before, during and after the Nazi era. If his book can't dissolve the myths that have grown up about it, nothing can. A word about views that may not sit well with a modern audience: I believe the commenters are talking about the book's take on Ernst Roehm and homosexuals in the Nazi party. Before the reader is too disapproving: they are simply dated and not particularly relevant remarks about these men, rather than offensive to homosexuals in general.
* see also: Godwin's Law

As said, this is not a book for the faint of heart but despite some views which seem archaic or offensive in today's society, it offers a glimpse of a terrible time in history and gives an insight into how civilization was duped into allowing so much evil to take root.Fasten your seatbelts, keep your tissues handy and prepare for a long but worthwhile read.

One should definitely read Shirer's "Berlin Diary" first, as it gives a thorough introduction to Shirer's viewpoint. He teamed with Edward R. Murrow to report on the rise of the Nazi's in the '30's. Murrow was based in London, Shirer, for much of the time, in Berlin. The Diary is very readable.

This history is ponderous: 1,040 pages. Shirer used material from interviews, extracts from the proceedings of the Nuremberg trials, and the voluminous captured written Nazi records. One of the things which makes it readable is that Shirer isn't shy about expressing his editorial point of view (which, as another reviewer mentions) isn't always politically correct in modern times. But at least he imparts a very human voice to this description of an inhuman episode in the history of the Western world.

Certainly fascinating reading but be ready for some shockingly blatant homophobic language and attitudes.

A++ The Rise and Fall of the Third Reich. A History of Nazi Germany. A must read>

“’Half of my nervous exhaustion is due to you. It is not worth it to go on. We need a National Socialist ardor now, not professional ability. I cannot expect this of an officer of the old school such as you.’” -- Hitler to General Halder (p. 201)

“’pathological over-estimation of his own strength and criminal underestimation of the enemy’s’” --General Halder writing about Hitler (p. 201)

“Hitler’s decisions had ceased to have anything in common with the principles of strategy and operations as they have been recognized for generations past. They were the product of a violent nature following its momentary impulses, which recognized no limits to possibility and which made its wish-dreams the father of its acts …” –from General Halder’s diary (p. 201)

“’The continual underestimation of enemy possibilities,’ Halder noted sadly in his diary that evening, ‘takes on grotesque forms and is becoming dangerous. Serious work has become impossible here. Pathological reaction to momentary impressions and a complete lack of capacity to assess the situation and its possibilities give this so-called ‘leadership’ a most peculiar character.’” --General Franz Halder, one of Hitler's generals during WWII (p. 201)

LisaintheLibrary thinks this title is suitable for 17 years and over