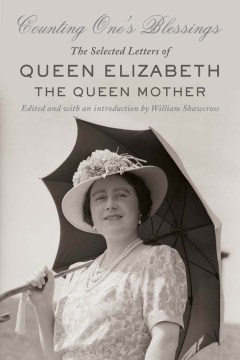 Baker & Taylor
Drawn from the vast wealth of material in the Royal Archives and at Glamis Castle, this deeply personal collection of letters, written by the Queen Mother from her earliest childhood to the very end of her long life at the beginning of the 21st century, reveals the real woman behind the public face.

William Shawcross's official biography of Queen Elizabeth the Queen Mother, published in September 2009, was a huge critical and commercial success.One of the great revelations of the book was Queen Elizabeth's insightful, witty private correspondence. Indeed, The Sunday Times described her letters as "wonderful . . . brimful of liveliness and irreverence, steeliness and sweetness."

Now, in Counting One's Blessings, Shawcross has put together a selection of her letters, drawing on the vast wealth of material in the Royal Archives and at Glamis Castle. Queen Elizabeth was a prolific correspondent, from her early childhood before World War I to the very end of her long life at the beginning of the twenty-first century, and her letters offer readers a vivid insight into the real person behind the public face.

Book News
Shawcross, who wrote a biography of Queen Elizabeth, showcases letters written by Queen Elizabeth throughout all the decades of her life. Her letters, like her life, span the political, social, and economic concerns of the 20th century and also reveal the private person behind the public persona. The book includes family trees and a total of 50 b&w historical photos, from Queen Elizabeth's childhood to old age. The author wrote the 2002 BBC TV series and book, Queen and Country. Annotation ©2013 Book News, Inc., Portland, OR (booknews.com)

Baker
& Taylor
Drawn from the wealth of material in the Royal Archives and at Glamis Castle, this collection of letters, written by Queen Elizabeth from her earliest childhood to the end of her life, reveals the real womahn behind the public face.