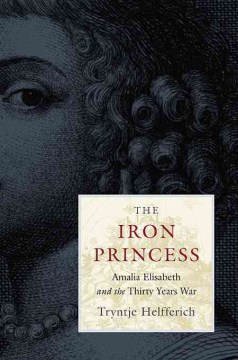 The Iron Princess : Amalia Elisabeth and the Thirty Years War

Thrust into power in the midst of the bloodiest conflict Europe had ever experienced, Amalia Elisabeth fought to save her country, her Calvinist church, and her children’s inheritance. Tryntje Helfferich’s vivid portrait reveals how this unique and embattled ruler used her diplomatic gifts to play the great powers of Europe against one another during the Thirty Years War, while raising one of the most powerful and effective fighting forces on the continent.

Stranded in exile after the death of her husband, Amalia Elisabeth stymied the maneuvers of male relatives and advisors who hoped to seize control of the affairs of her tiny German state of Hesse-Cassel. Unshakable in her religious faith and confident in her own capacity to rule, the princess crafted a cunning strategy to protect her interests. Despite great personal tragedy, challenges to her rule, and devastating losses to her people and lands, Amalia Elisabeth wielded her hard-won influence to help shape the new Europe that arose in the war’s wake. She ended her reign in triumph, having secured the birthright of her children and the legalization of her church. The Iron Princess restores to view one of the most compelling political figures of her time, a woman once widely considered the heroine of the seventeenth century.

In the bloodiest conflict Europe had ever experienced, Amalia Elisabeth fought to save her tiny German state, her Calvinist church, and her children’s inheritance. Tryntje Helfferich reveals how this embattled ruler used diplomacy to play the European powers against one another, while raising one of the continent’s most effective fighting forces.

Book News
Striving for a balance of breadth and depth as well as global versus local, Helfferich brings into focus an astonishingly complex, clever, and accomplished woman, who was praised by the likes of Cardinal Richelieu himself. A mother of 12 children (eight of whom died), Amalia Elisabeth stepped squarely onto a larger stage when her husband, the regent of Hesse-Cassel, died in the middle of the Thirty Years War (1618-1648). She took his place in the face of much opposition in order to protect her children's patrimony and bring some semblance of security to their lives in a tumultuous time. The highly-educated and multilingual Amalia ruled her territory in exile for years with 20,000 troops at her disposal as she carried on her husband's legacy as well. Her impact at the time included such a strong defense of Calvinism that it effectively garnered Calvinism legitimacy as a religion along with Lutheranism. As a measure of her importance, when peace came, fifteen paragraphs of the treaties that ended the war addressed her issues, and her princedom was the only one given financial compensation as reparations. Interestingly, a survey in the 1960s of German villagers found that for many the Thirty Years War was the worst thing that ever happened to their village. Perhaps with Amalia as poster child, Helfferich posits the need to go beyond rational choice to understand the motivations for war, and suggests an analysis of politics and religion as well. There are eight black-and-white pictures of Amalia and other prominent personages, as well as two depictions of battles. The book is very well organized, coherent and readable. Annotation ©2013 Book News, Inc., Portland, OR (booknews.com)