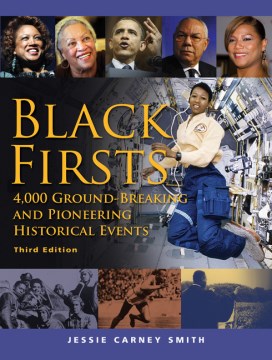 Perseus Publishing
Achievements, pride, and accomplishments involving people, places, and events in black history are gathered in Black Firsts: 4,000 Ground-Breaking and Pioneering Events. This new edition collects and celebrates the thousands of world-moving people and hard-to-find facts and accomplishments that have helped shape society and culture. It recognizes and honors both renowned and lesser-known barrier-breaking trailblazers in all fields&#151;arts, entertainment, business, civil rights, education, government, invention, journalism, religion, science, sports, music, and more. With more than 350 photos and illustrations, this vital collection includes thousands of personal victories and triumphs. Revel and rejoice in the hard work accomplished by these men and women who overcame adversity and difficulties. Read about change, progress, and the pioneers, such as Who was the black explorer who joined the Lewis and Clark expedition? Who was the black hero who sacrificed himself at the Boston Massacre, an event that would help inspire the American Revolution? Which two songs by Black Americans are the first to reach outer space? Who were the Tuskegee Airmen and why are they so famous? Why was Hattie McDaniel&;s performance in Gone with the Wind significant? What movie featured the first black female lead in a Disney animated feature?

Book News
This text is a comprehensive record of over four thousand examples of achievements and historical firsts initiated by black Americans. They're organized thematically and then chronologically. There are entries under: arts and entertainment, business, civil rights and protest, education, local government, county and state government, federal government, international government, journalism, military, miscellaneous, organizations, religion, science and medicine, and sports. The entries include the date, a few sentences to over a page of content, and a citation. Several entries have black and white photos. This third edition contains new sub-headings, expanded tables, and more achievements by women. Distributed by Independent Publishers Group. Annotation ©2013 Book News, Inc., Portland, OR (booknews.com)

A testament to a rich but often overlooked part of history, this work captures the stories of barrier-breaking African American pioneers in all fields—arts, entertainment, business, civil rights, education, government, invention, journalism, religion, science, sports, and more. With hundreds of illustrations and a daily calendar of firsts, this chronicle reveals stories of those who overcame adversity to emerge triumphant and celebrates those who have won personal victories against the forces arrayed against them. A vital collection of more than 4,000 entries, this book is proof that the celebration of African American accomplishments is ongoing.