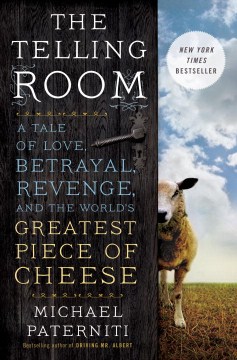 A Tale of Love, Betrayal, Revenge, and the World's Greatest Piece of Cheese

In the picturesque village of Guzmán, Spain, in a cave dug into a hillside on the edge of town, an ancient door leads to a cramped limestone chamber known as “the telling room.” Containing nothing but a wooden table and two benches, this is where villagers have gathered for centuries to share their stories and secrets—usually accompanied by copious amounts of wine.

It was here, in the summer of 2000, that Michael Paterniti found himself listening to a larger-than-life Spanish cheesemaker named Ambrosio Molinos de las Heras as he spun an odd and compelling tale about a piece of cheese. An unusual piece of cheese. Made from an old family recipe, Ambrosio’s cheese was reputed to be among the finest in the world, and was said to hold mystical qualities. Eating it, some claimed, conjured long-lost memories. But then, Ambrosio said, things had gone horribly wrong. . . .

By the time the two men exited the telling room that evening, Paterniti was hooked. Soon he was fully embroiled in village life, relocating his young family to Guzmán in order to chase the truth about this cheese and explore the fairy tale–like place where the villagers conversed with farm animals, lived by an ancient Castilian code of honor, and made their wine and food by hand, from the grapes growing on a nearby hill and the flocks of sheep floating over the Meseta.

What Paterniti ultimately discovers there in the highlands of Castile is nothing like the idyllic slow-food fable he first imagined. Instead, he’s sucked into the heart of an unfolding mystery, a blood feud that includes accusations of betrayal and theft, death threats, and a murder plot. As the village begins to spill its long-held secrets, Paterniti finds himself implicated in the very story he is writing.

Equal parts mystery and memoir, travelogue and history, The Telling Room is an astonishing work of literary nonfiction by one of our most accomplished storytellers. A moving exploration of happiness, friendship, and betrayal,The Telling Room introduces us to Ambrosio Molinos de las Heras, an unforgettable real-life literary hero, while also holding a mirror up to the world, fully alive to the power of stories that define and sustain us.

Praise for The Telling Room

“Captivating . . . Paterniti’s writing sings, whether he’s talking about how food activates memory, or the joys of watching his children grow.”—NPR

“Unforgettable . . . a must-read for all who think of Spain as magical, who consider cheese as the ultimate gift of love, who love stories of betrayal, despair, revenge and redemption.”—The Wall Street Journal

“The Telling Room embodies the spirit of slow food and life.”—Michael Pollan

“Elegant, strange, funny, and insightful, The Telling Room is a marvelous tale and a joyful read, a trip into a world peopled by some of the most remarkable characters—and, yes, cheese—in memory.”—Susan Orlean, author ofThe Orchid Thief


Baker & Taylor
Recounts the author's visit to the Castilian village of Guzmâan as part of a decade-long effort to taste the world's finest cheese, an encounter that involved him in long-held regional secrets and the story of a heartbroken genius cheesemaker.

Baker
& Taylor
The author of the best-selling Driving Mr. Albert recounts his visit to the medieval Castilian village of Guzman as part of a decade-long effort to taste the world's finest cheese, an encounter that involved him in long-held regional secrets and the story of a heartbroken genius cheesemaker.

A stirring, glowing monument to the stories of our lives, beginning in curiosity, developed in confusion, and completed in transcendence. On the surface, Paterniti’s story is about a cheesemaker in a tiny village in the Castile region of Spain. Ambrosio Molinos turned out to be a larger-than-life philosopher and storyteller, with a long tale of why he was no longer making the fabulous cheese which had won awards all over Europe. Ambrosio’s philosophy was that of a simple life where you knew the people who made the cheese, and the wine, and the food you were eating. But Ambrosio had a dark side, when he talked about his closest friend who had betrayed him and cost him the company which made the cheese.

Paterniti was so fascinated by Ambrosio, his village, and his friends, that he moved his family to Guzmán for 6 months to live the simple life and to work on a book about the cheese and its story. But also it also became his own story, as he tried to figure out what kind of life he and his family wanted to live. This is a wonderful book, full of history and philosophy, but also full of the joy of people who live together and who make what they eat.

A story more about storytelling and life itself. In the words of the author, "So a guy tells this other guy a story about some cheese, and a murder plot, and he believes it. Then he goes to New York and sells it as a book..." Seriously, this is really a novel of self-discovery, and a philosophical reflection on the presence of myth in our lives, and a poetic paean to lost rural values and family development and village life and betrayal and vendetta ... and a *really* good cheese.

A quirky tale but I did enjoy it even with all of the footnotes etc. Some days it would be nice to escape to Guzman!

"Having once worked as a part-time proofreader at Michigan's famous Zingerman's Delicatessen, Michael Paterniti never forgot a deliciously described cave-aged sheep's milk cheese he'd read about then. Eventually, he travelled to Guzmán, a rural Spanish village, where he discovered the amazing cheese that was "made with love" was no longer being made. The charismatic, larger-than-life farmer/cheesemaker Ambrosio Molinos de las Hera tells him he was betrayed by his partner, ruining the business. Paterniti quickly becomes enmeshed in Ambrosio's fascinating world, visiting often in order to savour his stories and dig deeper into his life; Paterniti even moves to the village with his wife and kids for a time. Chock full of footnotes and digressive passages, this leisurely yet tasty tale will best please those who enjoy the journey." Armchair Travel October 2013 http://www.nextreads.com/Display2.aspx?SID=5acc8fc1-4e91-4ebe-906d-f8fc5e82a8e0&N=688525