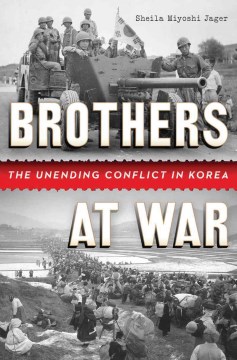 The Unending Conflict in Korea

Sixty years after North Korean troops crossed the 38th parallel into South Korea, the Korean War has not yet ended. Sheila Miyoshi Jager presents the first comprehensive history of this misunderstood war, one that risks involving the worlds superpowersagain. Her sweeping narrative ranges from the middle of the Second World Warwhen Korean independence was fiercely debated between Roosevelt, Stalin, and Churchillto the present day, as North Korea, with Chinas aid, stockpiles nuclear weapons while starving its people. At the center of this conflict is an ongoing struggle between North and South Korea for the mantle of Korean legitimacy, a brothers war, which continues to fuel tensions on the Korean peninsula and the region.
Publisher: New York : W. W. Norton & Company, 2013
Edition: First edition
ISBN: 9780393068498
0393068498

A Washington Post editorial opined, "How can such an agreement even be defended? ... It pays North Korea, and handsomely, for returning to the nonnuclear obligations it took on and violated and ideally should not have been paid for at all... The accord sets an international precedent that lets the North Koreans keep hiding for years the very facilities whose inspection would show their nuclear cheating to day."

Mac Arthur had become deeply despondent over the consequeces of China's intervention.

Smith made headlines around the world when he refused to call the withdrawal a retreat,"Retreat hell" he said,"We are not retreating. We're just advancing in a different direction."

Stalin's death was a turning point in the war, although few had been prepaired for it.

In the emerging cold war environment, a calculated determination was made that rebuilding Japan, rather than punishing Japanese war criminals, would better serve the long term security interests of the United States and the free world.

North Korea had survived by playing the two communist powers against each other, but this leverage would no longer be available.

The Great Leap was a huge lie.

The tiger wanted to eat human beings when it would do so would depend on its appetite.

Mao had also based his decision to enter the war on the understanding that China would receive air support from the Soviet Union.

This is a very good book on the overview of the Korean Conflict. It best details the major players, battles, and ideologies behind the Korean War. Given our current political climate I felt compelled to learn more about how we came to where we are today.

The first half of the book deals almost entirely with the war itself and the events leading up to and following it. It is a very gripping narrative, objectively told with points of view on all sides, and not leaving out any of the grisly and brutal details. The military maps are a bit difficult to read.

The second half of the book is not nearly as interesting and does not take it's time like the first half. After the war the book focuses more on China, Russia and U.S. Cold War policy/motivations. The Korean history after this point zips by, particularly the early 70's to late 90's period. Again, as we get closer to current day the book peters out a bit in terms of details and becomes more subjective musings on the situation.

All in all a very informative book I would recommend to anyone interested in the Korean War and each nations fomenting in it's aftermath.