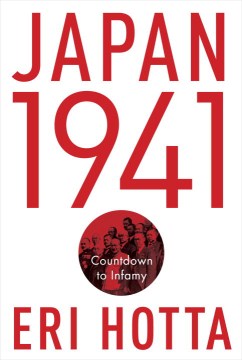 Examines the attack on Pearl Harbor from the Japanese perspective.
When Japan attacked the United States in 1941, argues Eri Hotta, its leaders, in large part, understood they were entering a conflict they were bound to lose. Availing herself of rarely consulted material, Hotta poses essential questions overlooked by historians in the seventy years since: Why did these men-military men, civilian politicians, diplomats, the emperor-put their country and its citizens in harm's way? Why did they make a decision that was doomed from the start? Introducing us to the doubters, bluffers, and schemers who led their nation into this conflagration, Hotta brilliantly shows us a Japan never before glimpsed-eager to avoid war but fraught with tensions with the West, blinded by traditional notions of pride and honor, nearly escaping disaster before it finally proved inevitable.
Publisher: New York : Alfred A. Knopf, 2013
Edition: First edition
ISBN: 9780307594013
0307594017

By allying with Japan and Italy, Germany hoped to deter the United States and minimize the chance of US participation in a European war.

when Japan sent planes to attack Pearl Harbor, it was mired in economic and political uncertainties.

Japan had entered into a situation of war with the United States and Britain in the western pacific before dawn.

Broadly speaking, one of the biggest obstacles to withdrawing from a war, especially a war you are losing is justifying the blood spilled and the money spent.

Stalin, of course, continued to be terrified by the prospect for a two-front war.

The French finally gave into a 'peaceful' Japanese takeover on July 22.

Man is not a man if he does not gamble.

none of the top leaders, their occasional protestations not withstanding, had sufficient will, desire; or courage to stop the momentum for war.

one must enter the tiger's den in order to catch his cubs.

This thoroughly researched, very readable work gives great insight into how and why Japan stumbled into WWII step-by-step. Interspersed with actual quotes and communications from the leaders, it shows how a modern nation, arguably the most advanced in Asia, engaged itself in a war that it knew it was almost certain to lose with an industrial, continental powerhouse, the U.S. I think that if only this story applied to the Japan of 1941, it would only be a well-told story to gaze upon with sadness, but the leaders of contemporary countries would do well to study the mistakes made and hope not to repeat them.
An excellent, highly readable book. I give it my highest recommendation.

Excellent work for both the knowledgeable & the novice. While a bit dense at times regarding background material all of it is relevant and worthwhile. Highly recommended.