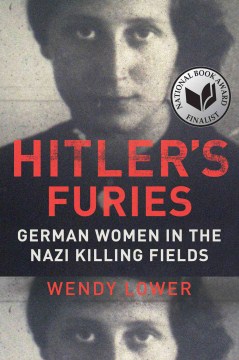 A revelatory new history of&#160;the role of German women in the Holocaust, not only as plunderers and direct witnesses, but as actual killers on the eastern front during World War II.

Wendy Lower&;s stunning account of the role of German women on the World War II Nazi eastern front powerfully revises history, proving that we have ignored the reality of women&;s participation in the Holocaust, including as brutal killers. The long-held picture of German women holding down the home front during the war, as loyal wives and cheerleaders for the F&#252;hrer, pales in comparison to Lower&;s incisive case for the massive complicity, and worse, of the 500,000 young German women she places, for the first time, directly in the killing fields of the expanding Reich.

Hitler&;s Furies builds a fascinating and convincing picture of a morally &;lost generation&; of young women, born into a defeated, tumultuous post&;World War I Germany, and then swept up in the nationalistic fervor of the Nazi movement&;a twisted political awakening that turned to genocide. These young women&;nurses, teachers, secretaries, wives, and mistresses&;saw the emerging Nazi empire as a kind of &;wild east&; of career and matrimonial opportunity, and yet could not have imagined what they would witness and do there. Lower, drawing on twenty years of archival and field work on the Holocaust, access to post-Soviet documents, and interviews with German witnesses, presents overwhelming evidence that these women were more than &;desk murderers&; or comforters of murderous German men: that they went on &;shopping sprees&; for Jewish-owned goods and also brutalized Jews in the ghettos of Poland, Ukraine, and Belarus; that they were present at killing-field picnics, not only providing refreshment but also taking their turn at the mass shooting. And Lower uncovers the stories, perhaps most horrific, of SS wives with children of their own, whose female brutality is as chilling as any in history.

Hitler&;s Furies will challenge our deepest beliefs: genocide is women&;s business too, and the evidence can be hidden for seventy years.

Baker & Taylor
A history of German women in the Holocaust reveals their roles as plunderers, witnesses, and actual executioners on the Eastern front, describing how nurses, teachers, secretaries, and wives responded to what they believed to be Nazi opportunities only to perform brutal duties.

Baker
& Taylor
A revelatory history of the role of German women in the Holocaust reveals their lesser-known roles as plunderers, witnesses and actual executioners on the Eastern front, describing how period nurses, teachers, secretaries and wives responded to what they believed to be Nazi opportunities only to perform brutal duties. 30,000 first printing.

This is a riveting and astonishing account of German women who willingly participated in widespread theft and murder in the eastern occupied territories, yet were largely ignored and not prosecuted after the war. Most of the individuals profiled in this book were secretaries and nurses, and this account does a good job of tracking them through the occupation, the war, and afterward. The descriptions of their work is horrifying.

Yes, I'm mad many of these ladies didn't get tried as war criminals.

A story literally no one wanted told; why bother, when you can blame it all on Hitler, or failing that, the menfolk? Ironically, it was only with the rise of the women's movement that the female citizens of the Third Reich began to receive their fair share of credit for the regime's rise and fall. Their stories have a dark similarity to those of women on the Allied side: dull everyday lives, the call of patriotism, struggles against sexist restrictions, self-actualization via work and sacrifice. They might be inspiring stories, if they didn't sometimes involve murder and plunder on a massive scale. Certainly the women "pioneers" in eastern Europe felt no more misgivings nor regret than the prairie pioneers of North America. Long story short: the women were as bad as they were given opportunity to be, and if they had been given greater opportunities, they would have been worse.

A book that will make your stomach turn--for the horrible crimes committed, as well as for the failure of the authorities after the war to prosecute the perpetrators.
Just disgusting.