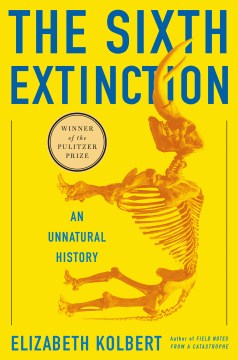 Provides a moving account of the disappearances occurring all around us and traces the evolution of extinction as concept, from its first articulation by Georges Cuvier in revolutionary Paris up through the present day. The sixth extinction is likely to be mankind's most lasting legacy, compelling us to rethink the fundamental question of what it means to be human.
Publisher: New York : Henry Holt and Co., 2014
ISBN: 9780805092998
0805092994
9781250062185

Easy read, not too scientific, gets the point across with good story telling.

This is the sort of book that deserves wider traction. It is a topic that is usually not given wider thought: the Sixth Extington. Appearing right now, at a planet close to you, your own. Preceding at geologic break-neck speed. Invoking human-induced habitat destruction for the co-inhabitants of planet earth. Operating also under the guise of global warming, another process rushing at as at a pace unheard of on a geologic scale. Ocean acidification, the plastic seas: all of these threats combine to produce novel circumstances to which many, perhaps most species cannot adapt. Continuing apace there are many passengers on planet earth will disappear.
The book is well written. The language not particularly challenging. It is easily accessible to the lay parson. Which is its intent: that it be read widely.
Kolbert’s book definitely deserves an A-plus for content and style.

This is an amazing book! Each chapter takes you around the world and through time while examining past, recent and current extinctions. This book is easy to understand and has realist approach to our current situation. I would recommend it to anyone who is interested science, history, and the natural environment.

According to this book just about everything humans come into contact with will soon be headed toward extinction. So essentially seeing that humans are global, everything we touch is doomed, flora and fauna. When you take a look at whats happening in the world today you have to think its possible, sadly.

The Sixth Extinction is a terrifying and exhilarating look at all the ways we're killing the species we share this planet with. She weaves modern examples and the history of science and extinctions to paint the picture of just how bad the outlook is.

I can't recommend this book highly enough. A fair warning, though: it doesn't have a happy ending.

The Sixth Extinction: An Unnatural History is a loosely connected compilation of essays and field notes written by Elizabeth Kolbert, a staff writer of The New Yorker. Each of the thirteen chapters tracks the extinction or near extinction of a species, and this smattering of evidence wanders into the assumption that mass extinction on planet Earth is again underway for the sixth time.

If you are thinking that climate change (aka global warming) will trigger the sixth extinction, you will have to read to page 102 to find the first mention of this threat. Later, in Chapter VIII, Kolbert carves out space to pad a declaration by Chris Thomas, a biologist at the University of York in England: "Climate change alone 'is unlikely to generate a mass extinction as large as one of the Big Five.'" He estimates that the extinction would extend to "around 10 or more percent of species."

As for the deadly results of pathogens, they are examined cursorily in just three pages. There is apparently no evidence that pathogens will threaten higher life forms, including Homo sapiens, otherwise known as the human organism.

This leaves acidification of the oceans as the likely trigger for mass extinction. Kolbert probes this topic in Chapter VI, The Sea Around Us, by citing a field trip she had at Castello Aragonese, a tiny island west of Naples, Italy. Here she makes this announcement: "Carbon dioxide has many interesting properties, one of which is that it dissolves in water to form an acid." (It will be helpful to remember that burning fossil fuels produces CO2.) Kolbert's guide is marine biologist Jason Hall-Spencer. Before the chapter closes, Kolbert offers this lament from Hall-Spencer: "Unfortunately, the biggest tipping point, the one at which the ecosystem [of the waters off the coast of Italy] starts to crash, is mean pH 7.8, which is what we're expecting to happen by 2100."

After Kolbert dropped this bombshell that life in the waters of the Mediterranean will crash by the end of this century—that's 82 years from now!—you'd think she would examine this part of the world with further scientific scrutiny but no, this didn't happen. Hey, if the Mediterranean is about to crash, then the Atlantic Ocean would soon follow, and you can kiss the Pacific goodbye. Hello, are there any marine biologists who understand the domino theory?

Kolbert must leave the dying Mediterranean because she must resume her travelogue. In the next chapter, she visits a speck of an island off the coast of Australia to study the effects of acidification on the reef that surrounds the island. In the chapter after that, she visits a mountainous region where the trees have been "moving upslope," which is to say, the higher reaches of the mountain, which had been too cold for the trees to grow, had warmed up and thus the seeds from the trees have taken root at higher elevations.

This jumble in presenting The Sixth Extinction is maddening. The subject never develops except by implication. Apparently the editors at Henry Holt and Company thought the author's travelogue would somehow validate the title of the book. The title, as terrific as it is, trolls with unbaited hooks.

Dear Elizabeth Kolbert and editors, you don't inform the reader that the Mediterranean is dying, then move on to explore a failing reef at an island, which "is less than 750 feet long and 500 feet wide." Wake up! The state of life on Earth has caught up to the science fiction that has shown how easy it is to wipe out life forms on the planet. Once the Mediterranean fails, it's all over!

The year 2100 may be too soon to write the obituary for life on this planet, but given the lack of stewardship among humankind for Earth and her countless families, the extinction of nearly all life appears certain.

This book is about the possible 6th mass species extinction which will be caused by global warming and ocean acidification. There are good perspectives here on the previous 5 mass extinctions and what is going on now and may happen in the future. I concluded that while extinctions of species are quite common now and historically, it is the rate of change that is being brought on by global warming that could cause the 6th mass extinction. A good read with some humor injected here and there.

“Timeline of extinctions in the Holocene”
https://en.wikipedia.org/wiki/Timeline_of_extinctions_in_the_Holocene
and,
“What We've Lost: Species Extinction Time Line”
http://www.nationalgeographic.com/deextinction/selected-species-extinctions-since-1600/

Within this century, man-made climate change may eliminate half of all living species on Earth. Elizabeth Kolbert examines the sixth mass extinction from the front lines: the Amazonian rainforest, the Great Barrier Reef, the Arctic ice cap. It’s a sobering read about the magnitude of our impact—and the catastrophic consequences that we, unlike the asteroid that caused the last mass extinction (of the dinosaurs), have the ability to alter.
Total reading time: 5 hours
How to read it: Before heading to a dinner party where you explain why you bike to work now

“Though it might be nice to imagine there once was a time when man lived in harmony with nature, it’s not clear that he ever really did.”