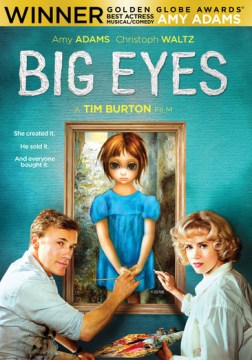 Notes: Originally released as a motion picture in 2014
Special features: The making of Big Eyes

I thought it was an okay show. I've certainly sat through worse. At least I didn't feel like I wasted my time. Worth a look.

This was a nice watch with me. The chemistry of the actors/actresses was great and the third act hit me deep since I have represented myself in court before and deeply clicked with how this movie resolved itself. The colour palette of the movie with it's rich blues and greens and yellows felt like a silent character in the movie itself. Very expressive and even more so as a true story. The end credit song "I Can Fly", was like icing in the cake.

Margaret painted them, Walter sold them, so why did he take credit for creating them too?
True story.

Hell's bells. Holy dung heap. Aw geeze, really? The male character is classic psychopath. Damn, and where was her (female character) nerve, she had it to leave her first husband (and this was in the 50's), but she spent 10 years of her life with this absolute loser. Good thing she became a Jehovah Witness as she may not have righted her self. She found God and she must have found then, her nerve. There is some redemption. I sure remember these prints, didn't we wee girls have one in the 60's or 70's on our walls, if not, then postcards or cards, and they were everywhere in the stores, I believe I remember the crushed velvet type in a frame, god, they were everywhere. The world is a tough place. She drew wonderfully, she was a great artist, but geeze louise, don't get eaten up by sharks!

Whimsical and charming, with a deep side showing how unfair and hurtful, gender discrimination can be.
A delightful, Joker-like, perhaps over-the top performance from Christoph Waltz.

Big Eyes isn't the best movie Tim Burton has directed, but I don't think it's his worst either. It is worth seeing once, especially if you have an interest in art and/or remember Margaret Keane's once ubiquitous prints of large-eyed children. The movie is rated PG-13 for thematic elements and brief strong language.

It would be a total understatement to say that "Big Eyes" could have been a whole lot better.

It would also be another total understatement to say that director Tim Burton really botched this picture up.

This is a tough movie to review. Was it bad? No. Was it great? Also, no. I'm glad I watched it but I don't think I would have been happy if I had paid to see it. This is like a TV movie of the week from the 1980s. It could have made a really great Lifetime or Hallmark channel movie. I feel like Tim Burton lost a bet or needed money to redo his kitchen so he slapped Big Eyes together and called it a day. The story is really interesting, in that this talented woman allowed her husband to take credit for her work. I am old enough to remember these creepy paintings still being in people's houses on the walls up through the late 1980s. It was nice learning about where these things came from and why they were popular for a while. What I think Big Eyes fails at is giving us any real sense of why Margaret Keane allowed her husband to dominate her the way that he did. She's still alive. She should have been consulted, with someone asking her to help with the script. The movie could have used a scene or two where she was sitting down with her friend and telling the friend exactly what she was thinking and why she did all this, just so that we the audience would know. The movie just sort of ends and doesn't really say much about what happened later. I looked it up online and Margaret is still painting as of 2016 and has a website. Her style has evolved a little and now she paints human heads onto the stems of flowers and plants. She is talented but there does not seem to be a big demand for the human/plant chimeras she's into these days. This would have made a great Lifetime movie. They would have had so much fun with the story, instead of the movie being so dull the way that Tim Burton made it.

Margaret: ... You are... very talented at being charming. And you are a genius at sales and promotion.
Walter: Hm! It sounds like you've described two different men. Hmm. One a sadistic ogre, and the other one a delightful bon vivant.
Margaret: Well, that's you, Walter. You're Jekyll and Hyde.
===
Judge: We can stay here until we grow old and die, but it's obvious that this case boils down to your word versus Mrs. Keane's word.
Walter: Mistrial.
Judge: No, it's not a mistrial! In my opinion, there's only one way to clear this thing up. You're both going to ...

Walter: It's the craziest thing. I started charging for the posters. First a nickel, then a dime...Yes, Maggie! It's cuckoo! But then it got me thinking. Would you rather sell one $500 painting or a million cheaply reproduced posters? See, folks don't care if it's a copy. They just want art that touches them. Then we could sell it anywhere. Everywhere!
==
Walter: Warhol's like me. That fruit fly stole my act.

Banducci: Walter, we made the front page. People are here because they wanna see the sappy paintings that made grown men fight.
===
Walter: Oh, honey, I just want to share them (Big Eyes) with the world. Would you rather have your children piled in a closet, or hanging in someone's living room?
===
Priest: It sounds as if your husband is trying to make the best of an imperfect situation. You were raised Christian, you know what we are taught: The man is head of the household. Perhaps you should...trust his judgment.

The '50s were a grand time,
if you were a man. I'm Dick Nolan. I make things up for a living. I'm a reporter. It's the strangest godd-n story that I ever covered. It started the day that Margaret Ulbrich walked out on her suffocating husband, long before it became the fashionable thing to do.
===
Ruben: I say no. It's not art (concerning the Big Eye works.)
Walter: It's not art?
Ruben: It's like the back of a magazine. You know, "Draw the turtle!" "Send in a nickel, win the big contest!"
Walter: How dare you! Lots of people will like this.
Ruben: Well, nobody who's walking through the doors of this gallery. Now, please, clear out the clutter before the taste police arrive.
===
Walter: We'll never break in! There's a secret society of gallery owners and critics who get together for Sunday brunch in Sausalito deciding what's "cool." Like McCarthy, in his hearings: "I anoint that painter. I banish that painter to Nowheresville."

violet_monkey_926 thinks this title is suitable for 7 years and under