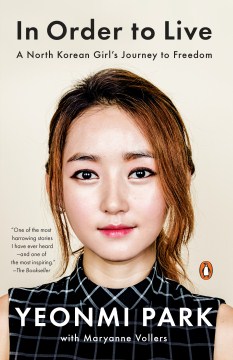 In Order to Live

Yeonmi Park has told the harrowing story of her escape from North Korea as a child many times, but never before has she revealed the most intimate and devastating details of the repressive society she was raised in and the enormous price she paid to escape.

It is an inspiring story! What this young woman had to go through is truly courageous. A must read. We fret over the little stuff and forget to be grateful for what we have-most importantly, Freedom. Her journey is a must read. This book is well written and the flow of the book is engaging. It is one the finest non-fiction books I have read in recent past.

A real eye opener. A biography worth reading.

Excellent book! Could not put it down.

Excellent book. I learned the difference between life in North Korea vs. South Korea. I recommend this book.

I thought her story as a child going through the famine in North Korea to the human trafficking in China to adjusting to life in South Korea to be fascinating and horrifying. It is a story that must be told and she said it so well. I am happy she did well in school and hope she continues to do good work.

I finished reading the book this weekend after several pauses. It was a tough read especially for a young girl. It was written with description that it makes the reader feel like we are with her in the journey. I know nothing much on what goes on in North Korea other than what I see in headline news and most likely it's nuclear issues, etc, but never what goes on in North Korea. I have been to China, but know nothing about how human trafficking works. I'm glad that she and her family made it out to South Korea and is living better than before. After reading the book, I appreciate what I have compared to what she went through. I too hope along with her that North Korea will be democratized one day or at least starting to.

Excellent read. Culturally informative. I realize she had no time/ability to feel, but it would have added depth to the book.

This book is a must read. Especially for people that want to learn more about what it is like in North Korea, and for the victims of sexual trafficking. The story is split into three parts. North Korea, China, and South Korea. The first part details the author's experience as a young girl living in North Korea. There are many details and insights into the class system, and every day experiences involving famine, fear etc. The China section shows the devastating effects of human trafficking on vulnerable people. The third section might be considered the happy ending, with the reunion of the family. I cant really begin to express how important and courageous and inspirational this memoir is without you reading it yourself.

Yeomni gives a detailed picture of what it's like to live under an oppressive regime, the hardships, lack of food, power shortages (playing games in complete darkness).

She explains the "class" system, and how her family was in a higher echelon but fell once her father was caught smuggling metal (the only way he could provide for the family). And once you or anyone go down in the social ladder there's no recovery.

The government is dreadful at managing the country, there are shortages everywhere (except the capital), even major infrastructure like railways suffer with trains unable to complete journeys due to power shortages.

It's sad to read of the hunger to the point they can think of nothing else but food. The whole tragic situation is the worst of all communist dictator governments.

A must read for anyone concerned about human rights.

Yeonmi's story is amazing. It is still difficult for me to comprehend that these things are happening today, but that is why this was such an important read. It did get difficult to read towards the middle, because of her experiences being trafficked in China, but I'm so grateful she was brave enough to share her story with the world.

csrestall thinks this title is suitable for 18 years and over

glenneaton thinks this title is suitable for 15 years and over

jenna_alexandria thinks this title is suitable for 18 years and over

This novel is divided into three parts. The first North Korea details the authors life as a young girl in North Korea. In the beginning of her life her father had a good status with the government and was able to provide his daughters with food, clothes, and luxury items to an extent. He fell out of favour with the government and relied on smuggling to make his money and was still doing well for his family. Everything changed when he was arrested and the family's social status changed. There was not much food and the girls were starving, they were not sure if they would ever see their father again. They were often left alone for long periods of time, months on end. Eventually their father was released from prison and they were a family once more. Yeonmi's older sister wanted to try to escape to China, their mother thought it was also a good idea but wanted to go together. Her sister did not wait and went with a friend. She was missing for seven years. Trying to follow her sister Yeonmi and her mother decided to cross into China too, but were trafficked without much knowledge of their situation. They were sold for their bodies and raped. Yeonmi was only 13 years old, she had to live with a man as his mistress to avoid being sold to a farmer. Her mother was sold and they were separated.Eventually Yeonmi's father was able to be smuggled into China where it was discovered he had cancer and died shortly after. After much hardship they were finally able to cross into Mongolia and to South Korea where they were eventually reunited as a family.

"It's amazing how quickly a lie falls apart in the face of truth."