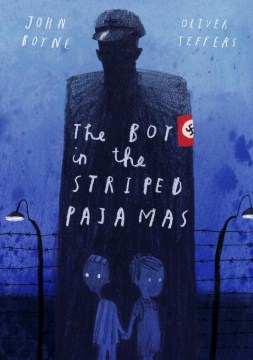 The Boy in the Striped Pajamas

Notes: Originaly published in a slightly different form by David Fickling Books in 2006

The Boy in the Striped Pajamas was one of the books that could really hold my attention and it brought another viewpoint into the horrid acts of the holocaust. The main character is Bruno, a nine year old German boy that deals with the same events that really occurred in WWII Germany. It follows him and his path as he and his family move because of his fathers work. It is able to show a different look on how a German kid saw the war and the Holocaust. The book is on the shorter size but gives an amazing, but sad look at the Holocaust.

The Boy in Striped Pajamas describes the riveting challenges that a young, eight-year-old boy, Bruno, must go through throughout World War II. This book shines light on the obstacles that happened during Adolf Hitler’s, or as referred to in the book, “The Fury”, reign. One day, Bruno comes home to the shocking sight of all of his things being packed away to which he is later explained that his family is moving as his father has accepted a job, which he considered an honor, from “The Fury”. As Bruno adjusts to his new home in Auschwitz, he desperately longs to explore the way he loved to go back home in Berlin. On one of his excursions, he finds a fence and walks along it, and later meets a boy named Shmuel who is on the other side of the fence. Eventually, Bruno’s mom convinces their father to move back to Berlin, but before they go, Bruno dresses up in striped pajamas to explore the concentration camp that Shmuel is in. As Bruno attempts to escape, the soldiers round up all of the prisoners and Bruno is trapped. His father eventually finds out what happened to Bruno, and it completely breaks him. The saddening tale is full of suspense, and the ending might shock some readers.
This book is a thrilling educational book which provides countless lessons for readers of any age. The Boy in Striped Pajamas did a fantastic job of describing the problems that were happening time and time again in the time period of Hitler. I really enjoyed reading this book and would, without a doubt, recommend it to anyone who loves a good read and a good educational lesson.
- Age Rating: 13+

Although it was short(216pages) it's an amazing book. After reading a few pages you cannot stop reading. The ending left me depressed :(

Great book. I liked how Bruno and the Jewish boy becomes friends even tho they were divided by a fence.

Nine year-old Bruno knows nothing of the Final Solution or the Holocaust. He is oblivious to the appalling cruelties being inflicted on the people of Europe by his country . This is an emotional story about the horrors of the Holocaust. This is a good story to read if you don’t like intense, violent scenes, because while this is about the Holocaust, it is good about not overly-describing any of the more gory details of the scenes. While this is a good story, it is a rather easy read and pretty slow, getting to the largest plot point pretty late in the book. This novel is somewhat similar to All the light we cannot see by Anthony Doerr which is another historical book.

The book was well written and I enjoyed reading it. However, the author wrote the book through A nine-year-olds mind. The sophistication of language was not accurate to his perspective. Otherwise I loved the book. The premise was amazing and it started some good thinking.

An exciting book to read!
I like books that is about world war ll
The movie is the best

Booklistsoph thinks this title is suitable for 10 years and over

AwesomeErin_07 thinks this title is suitable for 9 years and over

secretswimmer thinks this title is suitable for 10 years and over

someone13 thinks this title is suitable for 12 years and over

mauve_cockroach_34 thinks this title is suitable for All Ages

thevales thinks this title is suitable for 12 years and over

Alanreviews thinks this title is suitable for 13 years and over

Posey_MayLove thinks this title is suitable for 13 years and over

cnelles thinks this title is suitable for 12 years and over

The book, is about a young boy named Bruno. In the start of the book in lives in Germany at the time of world war 2. Because, of his commander father, he is forced to move to a concentration camp named "Auschwitz". There by the fence he meets his new best friend. The book talks about, young Bruno's perspective on the world, during WW2.

9 year old Bruno is the son of a Nazi solider. One day, he comes home, and his father takes his family and moves to a countryside. There, they live in a house called "Out-With". Bruno finds it very lonely there, until one day he sees men and boys in stripped pajamas. He is very curious about this, and goes to explore. There, he finds Shumel, a Jewish 9 year old that is in the concentration camp that Bruno's home is so close to. Though they were separated with a wired fence, they become best friends, Bruno going there everyday to talk to Shumel, and Shumel waiting for him. But then, Bruno's father says that Bruno and his sister and mother must go back to Berlin, their orginal home. Bruno isn't willing to go back because he didn't want to lose Shumel, so for the last day he was at his home, "Out-With", Bruno sneaks under to fence to see what is on the other side.
Bruno never got to see Berlin ever again.

very sad book and its sad that during the holocaust(think i spelled it right) many died because of no reason and many just sat there and did nothing about it.

9 year-old Bruno, son of a Nazi solder moves from home town Berlin to Out-With, the name of their new home. one day Bruno go off exploring inot the forest, where he finds the concentration camp, and a little boy name Smeul, a Jewish boy. This is the story of Bruno adventures in a Nazi's world, and the adventure of Bruno and Smeul.

Fences like these are all over the world. We hope you never have incounter one

"And then the room went very dark and somehow, despite the chaos that followed, Bruno found that he was still holding Shumuel's hand in his own and nothing in the world would have persuaded him to let go."