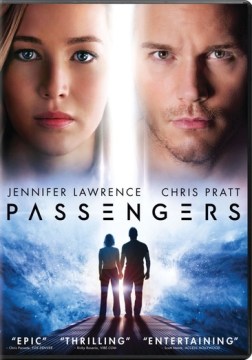 Notes: Originally released as a motion picture in 2016
Widescreen (2.39:1)
Special features: On the set with Chris Pratt; Casting the passengers; creating the Avalon; outtakes; Book your passage; first look at The Passengers Awakening VR experience

This film works because Chris Pratt, the male lead, is young and handsome. However, if a 65 year old, overweight male woke up a young female passenger would the same scenario play out? I understand this is fiction, but it plays into the damsel in distress/Stockholm Syndrome dysfunction.

Directed by Morten Tyldum in 2016, this Amercian SF drama depicts the struggle of two people who, awakened ninety years too early from an induced hibernation, save a malfunctioned spaceship that transports thousands of passengers, travelling to a distant colony planet.
Although the special effects appear great, the first half of the story seems tedious and too slow-paced and the storyline turns out too simple and predictable with no turns nor twists.

The best sci fiction movie I ever watched. 4.5 out of 5 stars!

This is an excellent movie that has a good plot and wonderful actors.

Loved this so much.

* * * * 1/2*
I've always believed that true science fiction creates
universes that allows us to examine those deepest
questions ranging from the ultimate challenges &
philosophies mankind faces, all the way down to the
most basic personal interactions in human relations.
That is not to say there cannot be entertainment in
rocket sleds or laser pistols. True science fiction,
however, makes you think "what if ?" or "would I ?".
Passengers, a good & entertaining film, I hope is the
start of a return to this most neglected & needed film genre.

red_alligator_17739 thinks this title is suitable for 10 years and over

DFX_ thinks this title is suitable for 12 years and over

humbleworm thinks this title is suitable for 14 years and over

Ianandson thinks this title is suitable for 13 years and over

King_of_the_Squirrels thinks this title is suitable for 14 years and over

Sexual Content: A few bedroom scenes but nothing salacious. Partial nudity: You get to see Pratt's naked butt a couple of times.

. A large spaceship moving along. Enters asteroid (cloud?) with out alerting crew! It's zapping force field happily does its thing but one gets through, causing a power drop that causes one hibernation bed to stop & wakes passenger Jim. He goes looking for someone in charge. Briefed by Hologram, on spaceship's destination to planet colony, a setup by Home-planets Ltd.

. Very oddly, there are no large red levers labeled "Pull in Emergency", to have system wake emergency crew to help anyone out. An obvious design flaw! Perhaps the designers were told by their statistician the chances of such being needed were 10 to power -1,000,000,000 & therefore not worth the 0.01% extra on the price of the spaceship. Jim uses large messaging device to tell Hp his plight. It displays a reply will take (75?) years.

. He decides to see what he can do for himself & reads up the operating manuals of the hibernation units, among other things. Learns these can't initiate hibernation - has to be done by another m/c. He decides to wake another passenger, Aurora. They enjoy a dinner date, followed by space walk - under the watchful camera of the algorithm driven automated sweeping unit.

. Aurora then gets really angry with Jim. All is not lost, however. The Electrostatic Discharge from the asteroid that got through the zapper force field has been wandering around the spaceship, upsetting systems & causing them to dysfunction. Again, none of them execute the algorithm to wake & ALERT THE CREW ! ! Perhaps this was cut, also, to save 0.01% extra on the price of the spaceship! Again, on the advice of said Statistician?!

. More systems fail. Aurora finds herself trapped in a floating big ball of water, when it floats up (or down?) from the pool.

. Hopefully, Jim & Aurora don't have to flag down any Alien Ships to get help. Especially that one that carried the Alien Eggs onto that colonized planet - then went on to give Ripley so much TROUBLE. Well, I guess I better quit here, with out issuing any spoilers. AT least I didn't have to intervene to stop anyone being stabbed. Hopefully to - this wont take 75 years to reach you guys.

There are 5,000 passengers and 258 crew members. So why am I alone?
===
Message sent.
-Outstanding.
Message will arrive in 19 years.
-Wait, what?
Earliest reply in 55 years.
-Fifty-five years?
We apologize for the delay.
===
Why are you always polishing a glass?
-Trick of the trade. Makes people nervous when a bartender just stands there.
===
A friend once said, "You can't get so hung up on where you'd rather be that you forget to make the most of where you are."
===
If you live an ordinary life, all you'll have are ordinary stories.
===
They say Time Heals all wounds.
-Broken Hearts aren't that simple, Arthur.
===
Who the hell planted a tree on my ship?