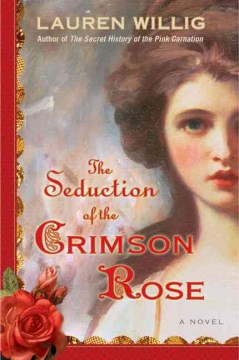 The Seduction of the Crimson Rose

Determined to secure another London season without assistance from her new brother-in-law, Mary Alsworthy accepts a secret assignment from Lord Vaughn on behalf of the Pink Carnation: to infiltrate the ranks of the dreaded French spy, the Black Tulip, before he and his master can stage their planned invasion of England. Every spy has a weakness, and for the Black Tulip that weakness is black-haired women--his "petals" of the Tulip. A natural at the art of seduction, Mary easily catches the attention of the French spy, but Lord Vaughn never anticipates that his own heart will be caught as well.--From publisher description.
Publisher: New York : Dutton, 2008
ISBN: 9780525950332
Branch Call Number: FICTION WILLI...L
Characteristics: 385 pages ; 24 cm

Fourth in the Pink Carnation Series.

The Seduction of the Crimson Rose follows two characters from Willig's previous instalments of her Pink Carnation series, namely the jilted Mary Alsworthy and the dark and pouty, Lord Vaughn. Mary desperately wants another season to catch a husband, now that her sister Letty has stolen her best prospect. Lord Vaughn has to repay the Pink Carnation for a favour. In exchange for the money to finance said season, Mary agrees to be bait for the Black Tulip. But as the two work together, they begin to develop feelings that may complicate the situation for everyone.

I liked this book far more than I should have. Willig has done something interesting in this book. She has taken two characters that are seen as manipulative and self-centred in previous books and makes them sympathetic heroes. The complications thrown at the romance are typical regency romance, dead wives returning, family disapproval and other suitors, but by making these two characters compelling enough to carry the story, Willig proves that she is more than a regency romance writer.

Good addition to the series.

Lauren Willig's flowery series continues to unravel an entertaining and romantic story of the past and present. Her wit and humour add to this fictional tale of amorous spies and the young woman who uncovers them.

In her ‘Napoleonic Spy’ series, Lauren Willig turns her attention to the arch-villain of her previous novels, the roguish Lord Vaughn.
Lord Vaughn has, until now, been something of an enigma. He is one of the aristocratic set, but not particularly caught up in the national fervour that has everyone wondering the secret identities of the Scarlet Pimpernel, the Pink Carnation and the Black Tulip. However, this may be because he actually knows the identities behind these shadowy figures – all except for the nefarious Black Tulip.
The Pink Carnation seeks Lord Vaughn’s help in drawing out the Black Tulip, and he in turn ropes in a young acquaintance to help him.
Mary Alsworthy (she whose sister accidentally made off with her fiancée in Willig’s last novel The Deception of the Emerald Ring), is more than happy to do a little spying, for the right price. Could it be that Lord Vaughn has met his match in the black-haired beauty? For those interested in the high romantic adventure of the Georgian period, this series is a delight.