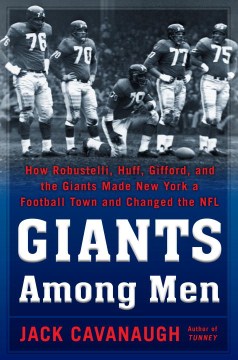 How Robustelli, Huff, Gifford, and the Giants Made New York A Football Town and Changed the NFL

Random House, Inc.
From the mid-1950s to the early 1960s, when basketball’s Boston Celtics were piecing together a run for the ages, when Montreal’s Canadiens were in the midst of notching a record-setting five straight Stanley Cups, and when the New York Yankees were the once-and-future kings of the diamond, one team boosted the NFL to national prominence as none other: the New York Giants.

In Giants Among Men, Jack Cavanaugh, the acclaimed author of Tunney, transports us to the NFL’s golden age to introduce the close-knit and diverse group that won the heart of a city, helped spread the gospel of pro football across the nation, and recast the NFL as a media colossus.

Central to Cavanaugh’s narrative, and emblematic of the Giants’ bond with their followers, was a hard-nosed future Hall of Fame defensive end named Andy Robustelli. A World War II combat vet, a graduate of Arnold College, undersized and nearing age thirty, Robustelli nevertheless anchored a Giants defensive unit so ferocious that they were the first team to inspire crowds to chant “Dee-fense!” But Robustelli and the Giants were a hit on the gridiron, playing in six NFL Championship Games in eight seasons between 1956 and 1963, the most remarkable aspect of this team was perhaps its relationship to the fans. These Giants were largely composed of ordinary joes who were equally at ease hobnobbing with Gleason and Sinatra at Toots Shor’s as they were rubbing elbows with working-class rooters on the IRT en route to Sunday games in the Bronx–like many of their fans, nearly all Giants players worked second jobs off-season to make ends meet. But the Giants of this era didn’t merely affect the fans’ relationship to the game; they changed the game itself. The team launched the careers of future head-coaching geniuses Tom Landry and Vince Lombardi, as well as those of a galaxy of stars and future Hall-of-Famers including Frank Gifford, Sam Huff, Emlen Tunnell, Roosevelt Brown, Y. A. Tittle, Charlie Conerly, Rosie Grier, and Pat Summerall. The Giants teams of this remarkable era were tagged with the soubriquet “Mara Tech” (for the Mara family, who had owned the franchise since its inception)–due to the number of players and coaches who later found success in the boardroom, the broadcast booth, and behind the bench.

Filled with historical and cultural insight and vivid portraits of larger-than-life characters and indispensable everymen, Giants Among Men transcends nostalgia and sports trivia to faithfully depict a watershed era for both football and the American nation.

“A winning tale . . . Jack Cavanaugh brings Tunney, Dempsey and the fight scene of the Roaring Twenties back to life.”
–Fort Worth Star-Telegram

“Filled with vivid characters from one of boxing’s most glamorous eras, this tale goes fifteen rounds and delivers plenty of punch.”
–Kirkus Reviews (starred review)

“One of the primary elements to the greatness of this biography is Cavanaugh’s ability to plumb the confusing depths of celebrity in America.”
–The Denver Post

Baker & Taylor
Offers a in-depth account of the New York Giants from 1956 to 1963, a close-knit team that dominated its division and boosted the popularity of the NFL, profiling such football legends as Frank Gifford, Sam Huff, Y. A. Tittle, and Andy Robustelli, as well as the team's assistant coaches, Vince Lombardi and Tom Landry. 40,000 first printing.

Baker
& Taylor
Offers a in-depth account of the New York Giants from 1956 to 1963, a close-knit team that dominated its division and boosted the popularity of the NFL, profiling such football legends as Frank Gifford, Sam Huff, Y. A. Tittle, and Andy Robustelli.

One of the most touted Giants of all time was Frank Gifford, who lives in town. Read about this illustrious team.