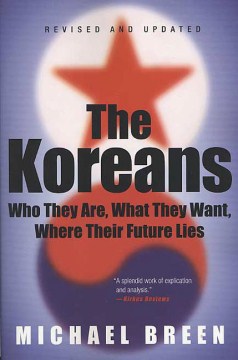 Who They Are, What They Want, Where Their Future Lies

Baker & Taylor
Updated to incorporate information on the growing unrest with North Korea, an incisive look at Korea, the history of its people, and the country itself examines how far the Koreans have come and where their advances will take them in the future, as well as how they will effect the world.

The rise of South Korea is one of the most unexpected and inspirational developments of the latter part of our century. A few decades ago, the Koreans were an impoverished, agricultural people. In one generation they came out of the fields and into Silicon Valley. In 1997, this powerhouse of a nation reeled and almost collapsed as a result of a weak financial system and heavily indebted conglomerates. The world is now watching to see whether the Koreans will be able to reform and continue their stunning growth.

Although Korea has only recently found itself a part of the global stage, it is a country with a rich and complex past. Early history shows that Koreans had a huge influence on ancient Japan, and their historic achievements include being the first culture to use metal movable type for printing books. However, much of their history is less positive; it is marred with political violence, poverty, and war--aspects that would sooner be forgotten by the Koreans, who are trying to focus on their promising future.

The fact that Korean history has eluded much of the world is unfortunate, but as Korea becomes more of a global player, understanding and appreciation for this unique nation has become indispensable.

In The Koreans, Michael Breen provides an in-depth portrait of the country and its people. An early overview of the nature and values of the Korean people provides the background for a more detailed examination of the complex history of the country, in particular its division into the Communist north and pro-Western south.

In this absorbing and enlightening account of the Koreans, Michael Breen provides compelling insight into the history and character of this fascinating nation.

I found this book valuable. All of the historical facts that Breen cited can be backed up by Lee Ki-Baik's Korea Old and New (although of course the interviews and anecdotes I can't account for). I thought this book was an excellent compliment to Old and New because it gave a personal narrative to the history (although, of course, I would be very interested in reading a similar item from a Korean).

But history is not the ultimate focus of the book. Breen is more concerned with the future of Korea, or rather the two Koreas. What is ironic is that while he notes (with some tone of criticism) a Korean tendency to speak wishes as if they were facts, he seems to close with a similar, rosy sentiment about how the Koreas might come together.

I certainly felt that while he looked at Korea with a critical eye, he did so in large part because he truly cared for the country and it's people.

**Michael Breen has published a new book in 2017 that covers more modern concerns of the Korean experience since this title’s release in the 90s and the Asian financial crisis. This newer work is titled ”The New Koreans: the Story of a Nation”**

A book that is outstanding for introducing who the Koreans are as a people and culture.

I watched dramas from Korea—also called K-dramas—for the first time after reading this book. I was pleasantly surprised with how much I understood what happened in the dramas socially and culturally. Without Michael Breen’s book I would have ignorantly passed or misunderstood details like just how young South Korea as a true Democtracitc government has been, the hitting others on head or men beating their wives, corruption in politics and chaebols (big corporations), the state of journalism in South Korea, and the impact of the division—and, technically, state of war with a decades long ceasefire—of Korea into the North and South.

Anything I see or hear when it comes to Korea comes not as surprise or an ignorant passing of details, but, instead, with understanding and an eye for the greater emotional significance behind words, actions and events.

A very open minded and unbiased look at Korea, the past, the present and the possibilities for the future.

glassblower_45 thinks this title is suitable for 15 years and over

Korea? That’s the place that has a communist North and a democratic south, like America, right? Oh, and K-pop, K-drama, and some awesome cosmetics come from there! Well, North and South Korea are not quite that, as author and journalist Michael Breen shows in this book.

THE KOREANS gives much needed insight into Korea and its people as they become an increasingly important country on the global stage…and as exposure to them is brought to other countries, known as the Korean Wave. Michael gives two decades first hand experience living in and reporting in Korea as well as solid research into the details beyond that experience. The book is broken down into four parts. Each part covers important facets That make up a country, its people and culture.

The book gives an unbiased and understanding illustration of the Koreans. A people who have retained their identity and language through multiple invasions and harsh treatment, as well as (for South Korea) emerged with an economic miracle.