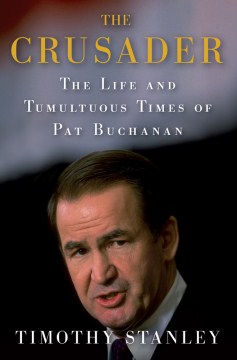 The Crusader : the Life and Tumultuous Times of Pat Buchanan

Baker & Taylor
A profile largely based on first-person interviews offers insight into the life, career and beliefs of the controversial conservative, citing his loyal service to Nixon and Reagan, leadership against the Republican establishment and role in decades of cultural upheaval.

Buchanan is one of America's most controversial conservative rebels. After serving Nixon and Reagan, he led a revolt against the Republican establishment that was a forerunner for the Tea Party. In 1992 he tried to take away his party's nomination from the incumbent president, George H. W. Bush. Although he lost, Buchanan set the tone for political debate for the next two decades when he declared a "cultural war" against liberalism and a jihad on Republican moderates. Throughout the 1990s, his radical, rollicking presidential campaigns tore apart the GOP and articulated the hopes and fears of a new generation of Middle American conservatives.

This balanced, and often funny, biography explores the highs and lows of Buchanan's career, from his stunning victory in the 1996 New Hampshire primary to his humiliating "grudge match" against Donald Trump in the 2000 Reform Party contest.

At its heart is a man who embodies the contradictions of the conservative movement: a wealthy bookworm who branded himself as an everyman reactionary, a Republican insider who became a populist outsider, a patriarch whose campaigns were directed by his sister, a socially unacceptable ideologue who won the affection of liberals and conservatives alike—Rachel Maddow, Ralph Nader, Eugene McCarthy, Ron Paul, even Mel Gibson.

Timothy Stanley tells the intimate story of the man who defined the culture war for a generation of Americans with outrage and wit; the man who, when asked what he thought about gun control, replied, "I think it's important to have a steady aim."

Baker
& Taylor
Offers insight into the life, career, and beliefs of the controversial conservative, citing his loyal service to Nixon and Reagan, leadership against the Republican establishment, and role in decades of cultural upheaval.

Read: . . . "Blowing Smoke: Why the Right Keeps Serving Up Whack-Job Fantasies about the Plot to Euthanize Grandma, Outlaw Christmas, and Turn Junior into a Raging Homosexual"
by Michael Wolraich

An interesting and informative look into what and who is the man and the brand that is Pat Buchanan. I don't always agree with the man and find myself cursing him as often as I hail him but there's something about him that I admire and respect. He's definitely a unique personality and this book offers a clearer picture into what makes him tick. Recommended.

There some minor mistakes and a few places where editing and rewriting would have made it a better book, but overall it is a good read for anyone wanting to know more about Buchanan and his role in modern conservativism and politics generally. I enjoyed learning about some of the folks who influenced him, some names I had never seen before. The author is clearly not of the same political persuasion, yet he does a fair and balanced analysis for the most part. The fact that he is young and not an American does hurt. At points, he rambles a bit. He provides too much detail and background sometimes. On a few occasions I was wondering "Now what does this have to do with Pat Buchanan?" Some of it could have been pared down.