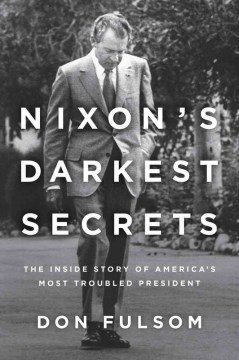 Nixon's Darkest Secrets : the Inside Story of America's Most Troubled President

Baker & Taylor
A veteran White House reporter analyzes lesser-known, disturbing aspects of the 37th President's character and beliefs, drawing on first-hand accounts to discuss such topics as Nixon's relationship with the mafia, his role in sabotaging 1968 peace talks and his struggles with alcohol.

A veteran White House reporter reveals our 37th president was even more sinister and haunted than we knew.

Richard Nixon left the White House in 1974 as our most disgraced president, but the American people never knew the full extent of his demons, deceptions, paranoia, prejudices, hatreds, and chicanery.

Calling on his work in covering Nixon, scores of interviews with members of Congress, White House staffers, and others close to our nation's thirty-seventh president, and invaluable, newly declassified documents and recordings, veteran journalist Don Fulsom sheds new light on "Tricky Dick." The author's revelations include:

- By the time Nixon became president in 1969, he had linked to the mob for more than two decades and, as president, had a close connection with New Orleans boss Carlos Marcello, the most powerful Mafioso in the nation

- The intimate and possibly homosexual nature of Nixon's relationship with confidante Charles "Bebe" Rebozo, a banker with mob ties

Fulsom's examination of these and other startling aspects of Nixon's personal and political dimensions paint an unflinching portrait of a leader who was once the most powerful man in the world.Nixon's Darkest Secrets provides a chilling final chapter in literature on our most troubled president.

Baker
& Taylor
Analyzes the lesser-known, disturbing aspects of the President's character and beliefs, discussing such topics as Nixon's relationship with the mafia, his role in sabotaging 1968 peace talks, and his struggles with alcohol.