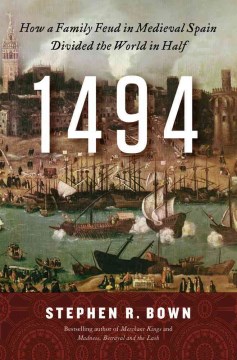 Baker & Taylor
Documents how Columbus's New World discoveries inflamed a conflict between the leaders of Portugal and Spain that was resolved by Pope Alexander VI, who proclaimed territory divisions in the Atlantic that had a profound influence on centuries of history.

"This is a starry love story, a tale of seething jealousies and subterfuge, a political imbroglio, and religious cruelties. It sounds like Shakespeare and it could have very well been the plot of one of his plays."
--Toronto Star

In 1494, award-winning author Stephen R. Bown tells the untold story of the explosive feud between monarchs, clergy, and explorers that split the globe between Spain and Portugal and made the world's oceans a battleground.
When Columbus triumphantly returned from America to Spain in 1493, his discoveries inflamed an already-smouldering conflict between Spain's renowned monarchs, Ferdinand and Isabella, and Portugal's João II. Which nation was to control the world's oceans? To quell the argument, Pope Alexander VI-the notorious Rodrigo Borgia-issued a proclamation laying the foundation for the Treaty of Tordesillas of 1494, an edict that created an imaginary line in the Atlantic Ocean dividing the entire known (and unknown) world between Spain and Portugal.
Just as the world's oceans were about to be opened by Columbus's epochal voyage, the treaty sought to limit the seas to these two favored Catholic nations. The edict was to have a profound influence on world history: it propelled Spain and Portugal to superpower status, steered many other European nations on a collision course, and became the central grievance in two centuries of international espionage, piracy, and warfare.
The treaty also began the fight for "the freedom of the seas"-the epic struggle to determine whether the world's oceans, and thus global commerce, would be controlled by the decree of an autocrat or be open to the ships of any nation-a distinctly modern notion, championed in the early seventeenth century by the Dutch legal theorist Hugo Grotius, whose arguments became the foundation of international law.
At the heart of one of the greatest international diplomatic and political agreements of the last five centuries were the strained relationships and passions of a handful of powerful individuals. They were linked by a shared history, mutual animosity, and personal obligations-quarrels, rivalries, and hatreds that dated back decades. Yet the struggle ultimately stemmed from a young woman's determination to defy tradition and the king, and to choose her own husband.

Baker
& Taylor
Documents the lesser-known story of how Columbus's New World discoveries inflamed a conflict between the leaders of Portugal and Spain that was intervened by Pope Alexander VI, who proclaimed territory divisions in the Atlantic that had a profound influence on centuries of history.

Fantastic book. All the Spanish history makes sense after reading this.

Lots of information but I dislike the format. The writer moves back and forth in history, this isn't my preferred method.