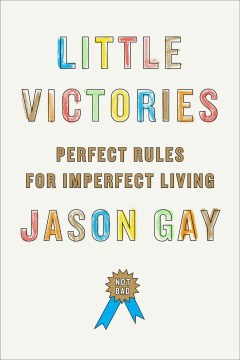 This is the book I’ve been waiting for most of my adult life. This is not a book extolling the secret habits of successful people whose power is now. This is not a book that tells me I have to eat kale, I have to love Caddyshack, or that it’s not cool to go to bed before 10 on a Friday night. This is a book that tells me I can eat that kale – if I want - covered in pesto so I can’t taste kale. That’s the kind of perfect little victory author Jason Gay embraces; getting your antioxidents without having to taste them.

Contrary to what you might think, this perfect little book comes from a moment of new-age-y mindfulness in Gay’s life. He admits he doesn’t always take everything in, or that he takes it in much later than in the moment, but he’s ok with that. In fact, his meandering words of wisdom are both hilarious and deceptively poignant, such as “If you are witnessing sports history, it should not be while picking at a salad.” Which may be interpreted as while it is good to take care of one’s nutritional health, it’s also perfectly acceptable to scarf down pizza on occasion.

His musings continue on the subjects of sports (he’s a sports columnist for the Wall Street Journal, after all), marriage, kids, vacations, parents, work, etiquette, technology and various combinations of all of the above. He has a right to muse – he’s travelled the globe, beat cancer, climbed back up the ladder after unemployment – and while he is never preachy about these struggles there is definitely something to learn from his words, which are at times so funny and touching you won’t know from which well your tears have sprung.