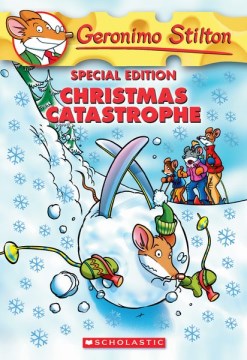 Christmas Catastrophe is a book by geronimo Stilton. Geronimo has invited his WHOLE family to go sking. In there lodge, they don't have enough beds for everyone. So they find other beds and put it in the closet. Poor Geronimo, he has to sleep in the same room as his cousin Trap.The next moring they all go sking. Just then a rude rat cut in front of the line. Luckly Geronimo stoped him. When they got off the ski lift the rude rat raced down the hill rashing into Geronimo. Thery both bumped into ech other and rolled down the hill into a snowball! Crash! Geronimo was sent to hospital the docter told him that every single bone was broken! Geronimo has to do a surgery. Geronimo was really scraed but he knew that he had to do it.After the surgery his whole family came to visit. After they left they left Geronimo felt loney. Good thing that a cherful nuse came to the rescue she was so kind you can't be sad. Then there was more good news a nother 2
rodents came in the same room one was ssooooo quit and the other one was ssssooo loud. Time passed geronimo's cast was taken off. But he had forgoten how to walk!!! The nuses and docters helped him get back on his paws. Every soon it was time for him to go home. It was almost Christmas again,Geronimo decided to spend Christmas at the hospital to cheer up mouslets at the hospital. Merry Christmas Geronimo!!!!